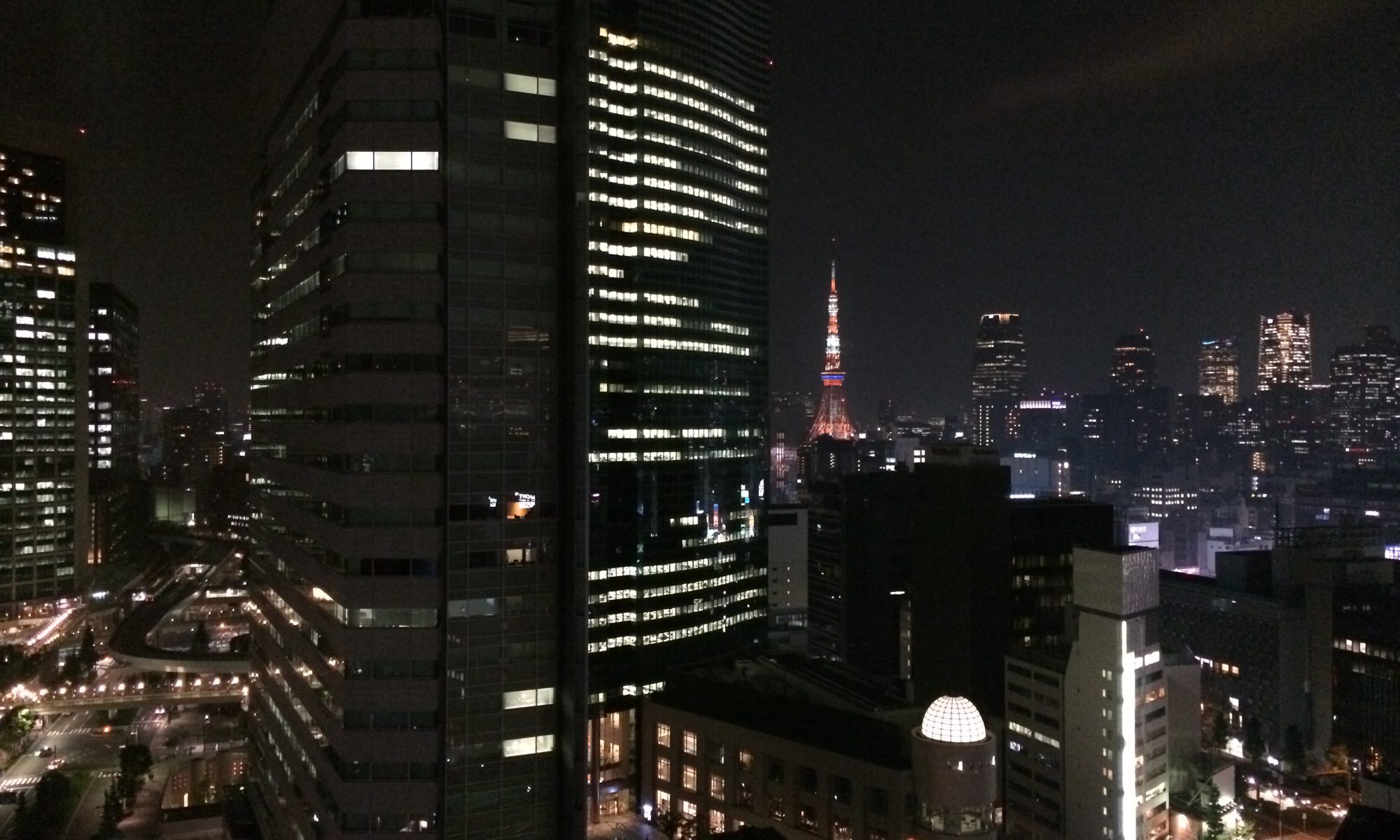 The cars ordered themselves nicely into their lanes. The massive sixteen lane intersection flowed clear as the amber lights flashed out. A sudden pause settled on the scene; only the reflection from the multi-storey advertisements flashing on the wet asphalt. Then the man went green and a flood of umbrellas erupted from all corners, merging, bobbing, weaving; the entire intersection submerged under a sea of almost entirely black stretched impregnated Lycra.

The large diagonals that drew the eye before the rush, disappear as the impossible number of people converge on the center point, surprisingly without the conflagration erupting into a melee of medieval hand-to-hand combat. Somehow the flow works and people pass by each other where there should be no room, raising umbrellas to three distinct levels of passing height, and generally twisting the laws of common, mortal physics. The occasional hulking form of a western tourist causes eddies of turbulence as they juke when they should keep steady-on; but these eddies smooth out so quickly that they only exist within the coat-tail radius of their progenitors.

Amongst the thriving mass then the unthinkable hardly draws any attention at first. Four bright yellow umbrellas move out into the interstitial triangles – each moving to a point within one of the triangles formed by the broad diagonals. The yellow umbrellas position themselves squarely at the central point of each and slowly twirl, stretching gently to the night sky. The hectic motion across the intersection continues unabated until the man goes yellow, then abruptly stops as the man  turns red. Only the four yellow umbrellas remain, slowly twirling in their four sections of the intersection.

All Tokyo holds its breath, then the lights flash green, but not a single car moves forward, not a single horn blares out. The yellow umbrellas continued to twirl slowly for a bit, then one by on they jab up into the sky and collapsed shut. The umbrellas drop to the ground, and four figures shrug off their dark rain coats to the ground. Everything changes as four fully grown Captadoodles stand up straight in the middle of the Tokyo intersection and roar.
Now for those few of you who have never seen or heard a Captadoodle roar before, understand that it is an odd phenomenon. Not terrifying, not even really frightening per se, but damned odd. The type of sensation that leaves you asking whether you’ve left the gas on and whether your parents actually had sex at some point, both thoughts colliding at the same moment. Damned odd.

By now traffic still hasn’t moved an inch, and the thousands of umbrellas all around the intersection titter and totter, half up half down? As their thousands of holders are transfixed in confusion as to whether to run or shake off the intruding image of parental coitus. Before the umbrellas have time to come to a conclusion, the four Captadoodles bend down, gather their coats and umbrellas and each moves off the way they had come, the crowd of umbrellas parting to let them pass. In moments they turn corners and disappear.
Still nothing moves into the intersection, and good thing too. Just as the driver in the fancy Toyota racecar in the front line shakes the odd image of his sister eating a giant grasshopper from his mind and is about to plunge down on the gas pedal to squeal tires for the assembled crowds, a twelve-hundred ton, giant head slams down into the Center of the intersection, jolting the sidewalk under the assembled umbrellas and thudding a mass of dust cloud into existence. As the thunderous slam recedes into the now panic crowd, the odd goes and only a sense of relief remains.

Everyone starts to look up – umbrellas clattering to the floor uncontrollably, the rain suddenly seems quite refreshing and light, as opposed to twelve-hundred tons of head. Fingers point at the sky as the source of the head until there can be no doubt that from the sky this monstrosity had come. With all this pointing and looking up at – well, the rainy darkened sky over Tokyo, no one took notice of what exactly the massive thing was that had so indelicately pounded a perfectly functional intersection into graham cracker crumbles and dust. It was an enormous, solid marble bust of a quite regal looking Captadoodle.